MRSA Methicillin-resistant Staphylococcus aureus is caused by Staphylococcus aureus bacteria …often called staph. Decades ago, a strain of staph emerged in hospitals that was resistant to the broad-spectrum antibiotics commonly used to treat it. Dubbed methicillin-resistant Staphylococcus aureus (MRSA), it was one of the first germs to outwit all but the most powerful drugs. MRSA infection can be fatal. Staph bacteria are normally found on the skin or in the nose of about one-third of the population. If you have staph on your skin or in your nose but aren’t sick, you are said to be colonized but not infected with MRSA. Healthy people can be colonized with MRSA and have no ill effects.

However, they can pass the germ to others. Staph bacteria are generally harmless unless they enter the body through a cut or other wound, and even then they often cause only minor skin problems in healthy people. But in older adults and people who are ill or have weakened immune systems, ordinary staph infections can cause serious illness. In the 1990s, a type of MRSA began showing up in the wider community.

Today, that form of staph, known as community-associated MRSA, or CA-MRSA, is responsible for many serious skin and soft tissue infections and for a serious form of pneumonia.
Click Here For the CDC Web Site on MRSA 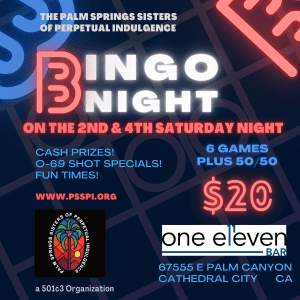 It may not be as big of a haul as last year but the @pssisters want to say #ThankYou for all the donations to our #annualtoydrive ... THANK YOU for all you've helped us provide to families and kids in need in the Palm Springs area.

Oh yes. Join the PS Sisters at BINGO this Saturday! All Ca$h prizes! O60 dollar shot specials, and you can help our annual holiday toy and gift drive and get an extra 50/50 game card! We're also still accepting warm clothing to provide to our homeless and less fortunate locals.