A “Sistory” of White Face

I was doing whiteface in Iowa in the mid-1970’s for artistic photography sessions. My friends and I lived in a Victorian house on Iowa Avenue in Iowa City (where we started RFD, the Radical Fairy magazine). One roommate was a photographer. and we would drop acid, I would get into costumes, do makeup and he would take pictures of me. It just seemed that the photos were richer and more dramatic with the whiteface on. The costumes were one way of expressing something and painting my face just added to that. When a painter begins he/she paints the canvas white first so that all the colors are more vivid.

After moving to a gay fairie farm outside Iowa City, Iowa, I would get dressed in a costume, paint my face, and this time do mushrooms, skipping down the country lane jumping thru imaginary hoops.

Moving to San Francisco in January 1977, I brought the 5 nun’s habits we had gotten from a Catholic convent in Cedar Rapids, Iowa. And I brought my love of whiteface.

So that Holy Saturday 1979, in a fit of boredom, I painted on the whiteface. Mish and Bruce (Barouk) Golden did not. We dressed in those nun’s habits, in our first day out in San Francisco. Yes, I was the FIRST Sister Of Perpetual Indulgence to wear whiteface. I had no idea it would become part of the worldwide iconic look of the Sisters. I was just doing it for me. Because I liked it.

In the years 1979 to 1984 most of the Sisters were negative about wearing whiteface because they felt they couldn’t be “real nuns” if they wore whiteface. After all, Catholic nuns don’t wear makeup. For mostly this same reason, the Australian and British Orders did not wear whiteface and only recently have some begun to appear in makeup.

Gradually San Francisco Sisters began to wear whiteface because they realized that in interactions with the public, people were more drawn to the makeup with comments and enthusiasm. Besides, photographers gravitated toward it. It looked more dramatic in photographs.

When the S.F. Order dwindled to 6 members from 1984 to 1987 we ALL wore whiteface and it became one of the recognizable iconic symbols of SPI as much as the wimples, veils and habits.

Besides artistic expression, I used whiteface to disguise myself from potential sex partners. In the early 1980’s it was NOT acceptable for “real” men in our community to do drag. You were considered not a “real man” if you did drag. Word would get around that you were seen in drag and your sexual prospects dwindled accordingly. Drag was anathema, essentially “in the closet”. The thinking was “we have to be acceptable to straight people so they will GIVE US our civil rights”. As well, I just liked the idea of anonymity. Nobody knew who I was when I was in “mufti”, out of costume. This provided some very interesting eavesdropping opportunities. Listening to people talk about me without them knowing it was ME they were talking about offered me some honest opinions on what the Sisters were doing.

Today, whiteface is part of the worldwide uniform of SPI queer nuns, along with our individual wimple design. Without the wimple and habit we would just be clowns. The wimple and habit add the political aspect. The whiteface is the artistic aspect. I’m sure the Catholic Church would prefer we stop wearing the wimple and habit and just wore the whiteface (they’d be our best friends!) The reason the church, to this day, is so OUTRAGED about us is that this iconic symbol has been expropriated by SPI for our own purposes. And that it is POLITICAL. Whether you choose to be conscious of that political aspect of your image or not, every time you put on your habit, you are making a political statement.

The makeup makes us pretty. 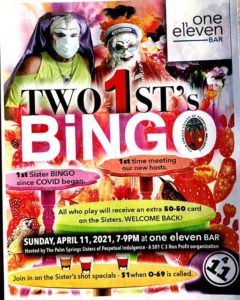 Well foo... #sisterbingo at #oneelevenbar is canceled tonight due to a power outage. This is just awful. But plan for the 25th...!

That's right Bingo-bitches - we're BACK!
Join the #PalmSpringsSisters as we host our first Bingo of the year (and of the pandemic!) at #One11Bar in Cathedral City!
Remember social distancing and masks are still a thing and WILL be required! Come along and play with #TheSisters!